RVhometown is reader-supported. When you buy through links on our site, we may earn an affiliate commission. Learn more

If you are going on a cross country trip on your RV, it is nice to have a couple of creature comforts in your vehicle to make it feel more like home. You should have a good way to pass the time whenever you are parked in an RV lot for a couple of days. The problem is that watching the stars is not that viable when light pollution makes them all but invisible. 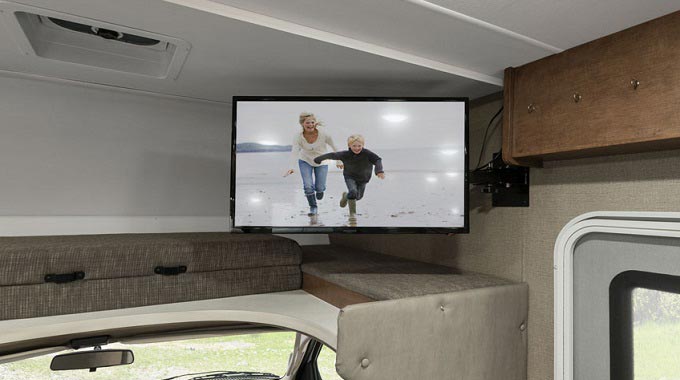 If you know how to install a flat-screen TV in an RV then you will have a neat way to pass the time until you are ready to hit the road again.

Benefits of Using a Flat Screen TV in your RV

If you have an older model RV, then it must have come standard with one or two bulky CRT TVs. If for whatever reason they still work until today or they just stopped working altogether a couple of years ago, but you just do not have the time to take them out, it is still a good idea to freshen up the interior of your RV by replacing your old dusty TV with a modern flat screen.

If you need a bit more convincing, here are some of the benefits that you can get:

Lightweight – Flat-screen televisions are a fraction of the weight of CRT TVs. If you are old enough to remember when huge CRT TVs were all the rage, then you probably remember how heavy they are.

Even a reasonably sized 32-inch CRT television can weigh a lot, so much so that you will need two pairs of hands to move it around. Flat screens are so light that you can lift a 32-inch television using just one hand.

Affordable – Flat-screen televisions are quite affordable. Unlike the days when they first became popular, they are now cheaper. For less than two hundred dollars, you can already get a perfectly sized flat screen television for your RV.

Easy to mount – Flat-screen televisions can be easily mounted in different ways. Because of their compact size, you can mount them in just about any flat surface in your RV.

You need to choose the appropriate TV mount for your flat-screen television. There are many different kinds of mounting brackets that you can use. These are fixed brackets and those that have articulated arms that you can use to move the TV from different viewing angles.

Fabricate an area where you will be securing the TV mount to. Ideally, you should use a 3/4” plywood, or fabricate a frame using 2x2s. Even if you think that the area you picked is rigid enough to carry the weight of the television, it is always good to be on the side of safety and overdesign a bit.

It is not just the weight of the television that you have to take into consideration. You also have to factor in the way it will move when the RV is in motion. Even though some large wood screws will suffice, it is always best to use sturdier carriage bolts just to be on the side of safety.

If you will be using an articulating mount, measure the maximum length that the mount can extend to so you can find out if you will need to buy extension cords or longer cables.

Flat Wall Mounts – Also known as a flush TV mount, a flat wall mount is the best choice if you want to give your RV interior a low profile, minimalist look. This type of LED wall bracket allows you to hang your TV on the wall as you would a picture frame.

This type of TV mounting is great for RVs because of the limited amount of space available. Flat wall mounts allow the television to sit flush against the wall or cabinet door. However, once mounted, you no longer have the option to adjust the position of the television. 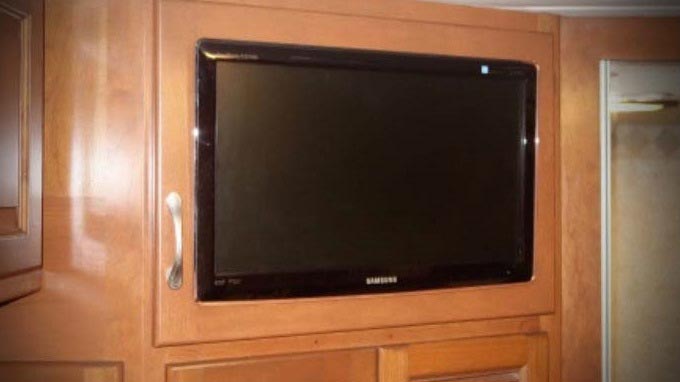 Tilt Mount – Tilt mounts look similar to flat wall mounts but they have the added benefit of being able to tilt the TV once mounted. Because of the additional moving components, tilt mounts are more expensive than their fixed counterparts.

The great thing about tilt mounts is that you can mount them on surfaces that are a bit above eye level. You just need to tilt the TV downward a bit to get the optimal viewing angle. This is also a neat feature especially for RVs because you can eliminate glare just by giving the screen a bit of tilt up or down.

Tilt mounts can usually tilt anywhere between 8 and 20 degrees. This might not seem like much but it can make a world of difference in terms of improving viewing angles.

Articulating TV Mounts – Articulating TV mounts are among the most popular TV mounts for RVs. These mounts can do it all. They can fit snug against any flat surface and they can also extend up to 30 inches. Furthermore, you can shift the TV from side to side. You can extend the arm and make the TV face in other directions.

The drawback of using this type of mount is that it is quite costly. It also does not swivel up and down. When folded, it does not sit flush to the wall. Also, you have to restrain it when the RV is in motion. It is also quite heavy so you need to have a reinforced mounting point as well as an extra pair of hands to help you keep it in place while you are screwing it down.

Full Motion TV Mount – This is the most flexible among all types of TV mounts. It allows the TV to tilt up and down and move it left and right. In some models, you can even rotate the screen 360 degrees. You can place the television in virtually any position that you can think of, giving you the chance to watch TV from anywhere in the RV.

You can also extend the television out of the wall and then turn the screen to any angle. However, just like the articulating TV mount, this is the most expensive type currently available. It also will not sit flush against the wall. It is also crucial to restrain it when the RV is in motion; otherwise, it will be swinging all over the place.

Also, because of all its moving parts, it is quite heavy, so you will need a reinforced mounting point to ensure that your television will not come crashing down to the floor when your RV hits a bump.

This is a great choice if you do not have much space to spare in your RV and you are fine with just a small LED television. These mounts are great because they still allow you to use the counter space underneath the cabinet.

The downside to these kinds of mounts is that they do not support larger television screens. Also, it can be difficult to run the required cables to the television.

These are the available options that you have when it comes to mounting your television in your RV. Regardless of the kind of television that you will be using, there is a mount that will perfectly fit your needs.

Thanks to the advances in television technology, televisions nowadays are so thin and light that you can easily mount them anywhere, even in your RV. With the proper kind of mount, you can use whatever size of flat-screen television that you like.

Do you want to have a personal cinema in your RV? You should clear out a large enough space on a wall and use a fixed wall mount to hang a 50-inch screen on it. Don’t have that much space to spare? Get an under the cabinet mount so you can hang a 24-inch screen.

If you know how to install a flat-screen TV in an RV then you can turn your television into a rolling cinema if you want to. Alternatively, you can also install a modest-sized one just so you have something that you can use to pass the time while you are on your travels.

Hi, I am Dane Heldt, a full-time RVer since 2016. I am always passionate about building and joining an RV community where people share their love for RV lives. This blog is a dream of mine, as I can finally share my experiences to help people who want to start living differently. So, feel free to reach out to me!